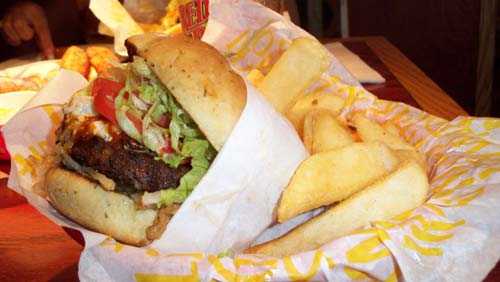 Although Red Robin will receive points for creativity those points are immediately deducted for over compensation and exorbitant flavors. What’s the deal Red Robin? The meat isn’t bad either. It just seems like the cook likes to get carried away and while it’s delightful to read (A juicy burger basted with a tangy steak sauce and topped with crumbled Bleu cheese. Served with onion straws, lettuce, tomatoes and zesty Chipotle mayo on an onion bun) and to see (smiling burgers?) the burger materialized is overwhelming and not worth the nine bucks you shoveled out for it. I ordered the Bleu Ribbon burger and found that every bite had way too much bleu cheese, and that’s a potent flavor to be bombarded with! When served, the burger had too much lettuce, that’s another one of their things. It’s supposed to help make the burger smile at you, but besides being visually appealing it just makes me feel like a rabbit not a meat-eating-burger-devourer. That zesty chipotle mayo also makes the flavor explosion more hiroshima than rad-party-in-my-mouth-dance-explosion. Really it seems like Red Robin needs to rethink and edit some of their burgers. We’re looking for Americana and not the hyped up 90s version that bought into itself a little too much. The onion bun, the bleu cheese, zesty chipotle mayo, lettuce, all the spectacle made me miss my favorite part: the onion straws. A delicious and brilliant addition to the burger, it’s nestled under the patty and between the bottom bun making it easy to be overshadowed by all the razzle dazzle. Tis a pity. Under all that I saw the sad meat patty wishing it was a part of a simpler and more tasty ensemble instead of trying to pull together the flavor disaster we we’re both victim to. SAD.

Red Robin tries hard to maintain the family atmosphere which is nice but also makes it hard for non-children having patrons to get it. The bar is slightly segregated which does make you feel weird about ordering an alcohol beverage from the “funtender” or “mixologists.” Are we all adults here Red Robin? Maybe not, but don’t patronize me for being over twenty one and wanting to get tipsy in this sadly contrived atmosphere. The walls are decked with portraits that are sometimes packed with forced meaning (James Dean, the Classic Marilyn in the white dress, Sinatra, blah da blah). Alas, maybe i would have loved the place…if i could have loved the burger.