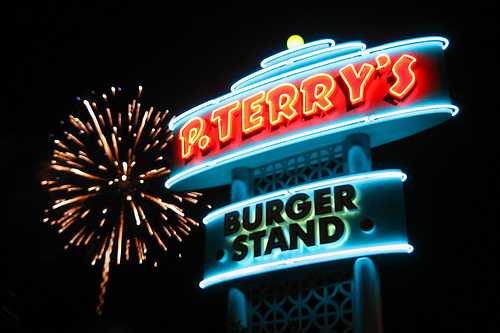 P. Terry’s at first glance gives the impression of another retro googie burger stand that only appears to pay homage to a golden era in Americana. The difference, the extra-Austin-something-special, is that P. Terry’s is the real deal. P. Terry’s materialized after a reading of “Fast Food Nation.” How something so entangled in the American culture could become so mangled, processed, and disassociated with anything else, what could that say about the American culture? With that Patrick Terry decided to open a business and manage it the way it should be managed. A place inwhich it’s not just the food but the quality, the ingredients, the way customers are treated, and the employees. The Austin Monthly would refer to P. Terry’s as anti-fast food, something they are quite proud of.

The most honorable of the little burger stands traits would be its strong ties in the community it feeds. P. Terry’s has donated to several charities in the community including Big Brothers and Big Sisters of Central Tx, Dell’s Children hospital, and Thoughtful House. They also support an Austin Little League! The burgerstand is reminiscent of the way we used to do business, when we cared.

There is a remarkable dedication to the food. Using simple condiments, All-natural Black Angus meat, and a special sauce these people make one heck of a burger. The patty is hand pattied and seasoned in the kitchen. The french fries show up as potatoes, as in: I will now scrub and cut this potato in the kitchen and create FRESH (hot) fries. The rest is simple: Mrs. Bairds buns, Heinz ketchup, Hellman’s mayonnaise, French’s mustard, milk in the milk shake, lemons in the lemonade. The art of burger making is not rocket science, but a science that insists upon simplicity and careful construction. Over the years that science has turned into processed freezer burned patties and American cheese-colored-non-milk based questionable component. And yes, it is more expensive to do it all natural, but it is, in P. Terry’s mind, the only way to do it. 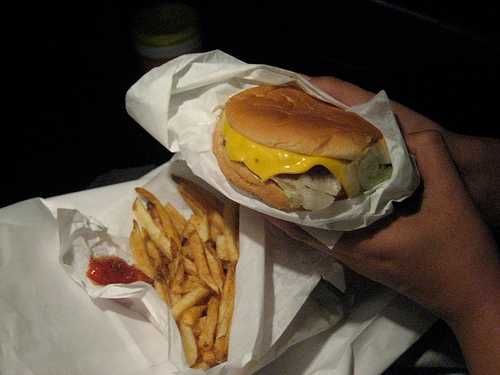 My particular burger was delicious. A simple concoction of single patty, lettuce, tomato, special sauce, and American cheese, with hot and delicious fries. I ate the whole darn thing and the fries. Although the burger isn’t big, it is a sizeable portion that will leave you satisfied. If not at 2.25 with cheese, 2 without, just order another. There is a double patty burger, chicken burger, and a veggie burger that Chef Andrew Brooks of Spirited Food helped create. I can’t wait to return to try just about everything else on the menu!

Some truly exciting news for fellow P. Terry’s fans is a second location now under way. Designed by Micheal Hsu it will be located on N. Lamar and will have indoor and outdoor seating and the drive-thru! It is currently scheduled to open in March 2009. Until then, stop by the south lamar stand, I say: Go and EAT IT pleasurably.